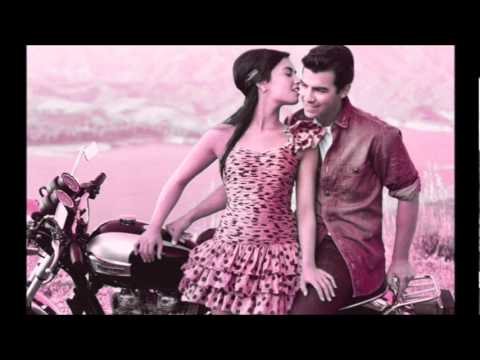 I was waiting for Selena outside of my class. "You lost new girl?" I looked up and it was Joe. "Deh-Me" I said, so he could it through his thick skull. "And No, I'm waiting for-" "Hey Demi! Let's go to your second period." Selena came and again linked my arm. "It's D11" I said with a smile, letting her know I was willing to become friends. Joe grabbed my wrist and said, "Sel it's not nice to interrupt a conversation. Especially with the sexy new girl." I shook him off and we continued to walk. "I wouldn't get to know Joe if I were you." Selena said breaking the silence. "Trust me, I wasn't even going to go there." I said. It was in the middle of 3rd period when I got a note to go to the principal's office. What the fuck did I do? I came up to the office and saw Joe sitting in one of the chairs. I sat as far away from him as possible, though of course he saw me and walked towards me. "Aw, new girl got introuble already?" He said while his eyes laughed playfully. "No, i don't know what the hell the principal wants." He chuckled. "Do i amuse you pretty boy?" I said giving him a nickname since I was 'new girl'. "Mmm baby, call me pretty all you want when you know that I'm sexy." I tried laughing sarcastically, but it was hard knowing it was true. After ten minutes of pointlessly conversating with him, I was getting impatient. "When the hell am I gonna get called in?" I said as I stood up. Joe grabbed my arm and pushed me against the wall. His hard chest against mine. His warmth felt somewhat comforting. "My new girl is an impatient little one isn't she?" He whispered sexily into my ear. I tried breaking away and said, "Get off of me!" It was impossible to break away since he was too strong. He kissed my lips, probably trying to silence me. I tried stifling back a moan while his tongue licked the outline of my quivering bottom lip. His right hand moved down to my waist, while he rubbed my figure. I didn't want to do this, but my body said something else. I parted my lips to let his tongue enter. As our tongues rubbed eachother slowly I grinded on his member. It was already boned up, just for me. I felt him moan in my mouth. That's when I knew I had him, so I stomped on his foot as hard as I could. "Ow what was that for?!" He yelped while grabbing his foot. "Never touch me like that again." I said as the principal came out. "Joseph, calm down out here. If you're going to be noisy with the girl, bring it to the 'room'" The principal said in a calm voice. I was confused, What room? "Excuse me, I've been waiting here with him" I pointed rudely at Joe "for way too long. Do you even need me in your office?" I asked. "Ahh Joseph she must be new to this school. Welcome to Haynes View High young lady. I can see my son has made a bad first impression on you." HIS SON?!